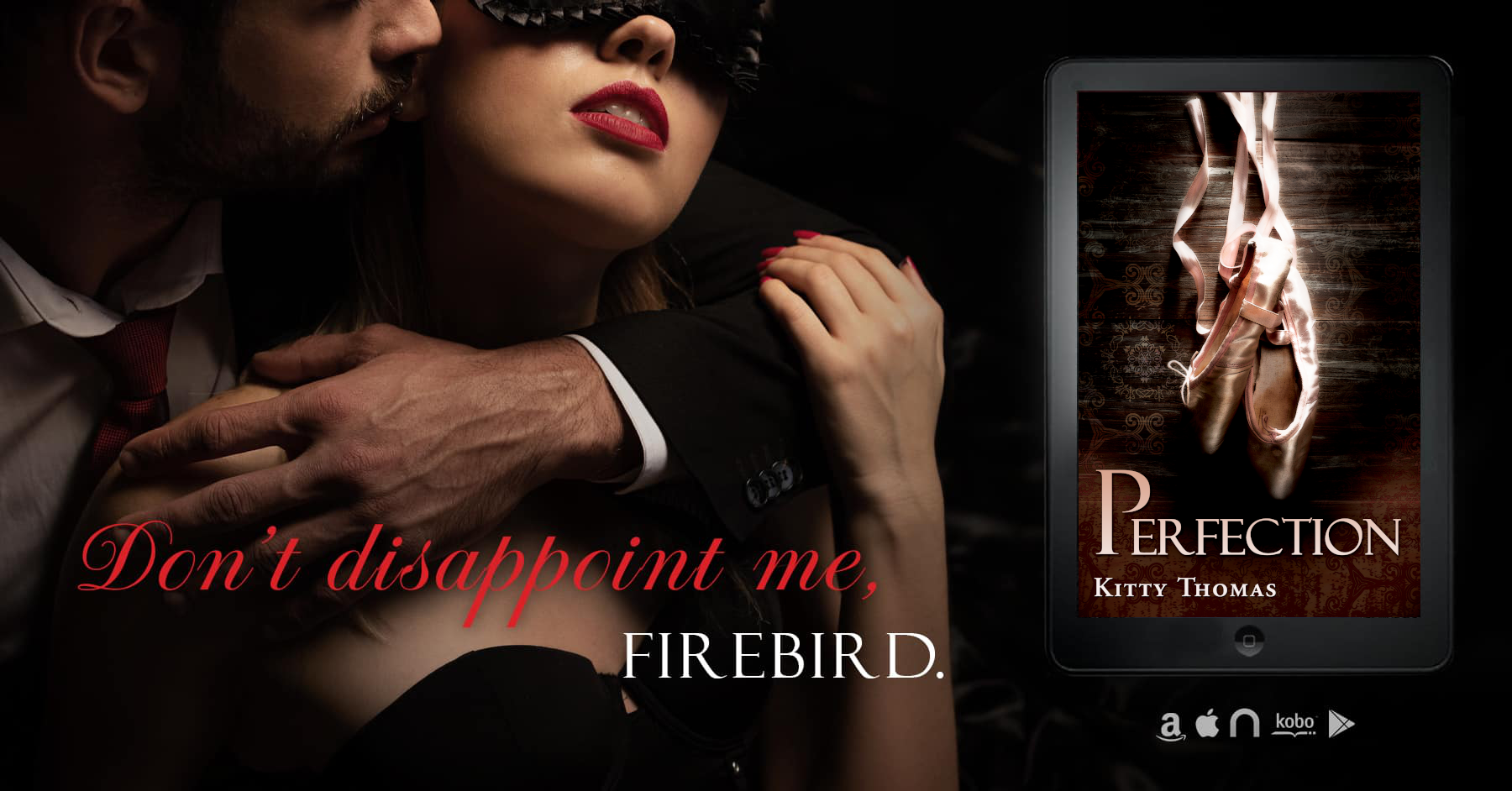 This week’s book of the week is Perfection. This is one of my favorites! First scene Free below the buy links! Also available in audio!

Everyone said I married the perfect man. But if Conall Walsh were perfect, I wouldn’t have killed him.

I thought I got away with it until I received an anonymous note at the ballet company I dance for. A mysterious stranger threatens to spill all my secrets. To ruin my life. To put me in prison for my crime.

I’m meeting him tonight at the abandoned opera house to beg him to spare me.

I can pay him. I have money. But his price isn’t money. It’s me.

This book is a standalone contemporary dark romance with an HEA and no cliffhangers.

“A hot dark story with a twist you won’t see coming. Perfection lives up to its name!” – Anna Zaires, New York Times bestselling author of TWIST ME

“So raw, sexy, and twisted, I couldn’t stop reading. The combination of mystery, fear, and eroticism is what Kitty Thomas does best.” – Annabel Joseph, NYT and USA Today bestselling author of MERCY

I just killed him. The body lies at my feet, more blood and gore than I’d expected to be honest. I’m not sure what I thought cutting up a body entailed, but I had to get rid of it.

Obviously, I know there is the tub-of-acid option. And I considered that. I really did. But all I could think was wouldn’t it be fucked up if I ended up burning my own skin away while trying to destroy the body?

I don’t think I processed the idea that I could also have a chainsaw accident. And by the time I had that harrowing thought, he was already in nineteen pieces while I contemplated if I needed to make his torso any smaller or was this enough?

Now the possibility that I could injure myself with the chainsaw has squirreled its way into my brain. No, we’re done here. Nineteen pieces. It’ll have to do.

I put what’s left of the perfect man into several black heavy duty garbage bags. I take down all the plastic wrap I’d taped up and laid down to catch everything. I’ve seen enough TV to know how this is done. Except on TV you don’t really see everything about clean-up, do you? If I had, blood wouldn’t have slipped out of the plastic onto the white tile floor of the master bathroom.

Fuck me. That is never coming out of the grout.

I take him out to the ocean… in his own boat. He named that boat after some side piece he was fucking. Probably fucked her yesterday. There’s something really satisfying about taking him on his last ride on the boat he used to rub Stella Crenshaw in my face.

The Delectable Stella it’s called. That fake-titted bimbo he was fucking in his office. I imagine him bending her over the copy machine after office hours, her fake nails digging into the hard plastic of the machine while she fakes her orgasm. Because there is no way she wasn’t faking it. Part of that is because Conall is bad in bed, and the other part is… well, everything else about her is fake. What’s one more thing?

My husband was a real piece of work, and if fucking his secretary had been the worst thing he’d done to me, we’d just be looking at a divorce. I asked for a divorce; he told me if I left him, he’d kill me. I don’t know why. After all, he had The Delectable Stella. But some men just need a Delectable Stella and a Punching Bag Cassia.

I’m not sure how far out to take him. You never see that part on TV. You just see the murder, then suddenly there’s a boat out on the ocean, and the bags are going into the water in the dead of night. I wonder suddenly if beachfront property is so expensive because of the ease of body disposal. That’s a perk you can’t get in the heartland.

I finally decide I’m probably out far enough and dump the bags over the edge. I remembered to weigh them down with heavy rocks. Otherwise, the bags will float to the top, some deep sea fisherman will pull it in with his haul, and then the investigation starts.

It’s three a.m. when I finally get back home. The house is so quiet. No yelling. No glass crashing against the wall. No screams (mine). No sound of my body being slammed against the wall. I really don’t know how I’ve survived this long. I guess a dancer’s body is built for a certain amount of abuse. But not this much. And not this kind. One of our more recent fights pops into my mind.

“Are you fucking him?”

“He’s my dance partner. And he has a boyfriend. I didn’t date other dancers in the company even before we met. You know that.”

I spend another half hour standing in the bathroom staring at the bloodstains in the grout. Am I in shock? Am I a sociopath?

Why don’t I feel anything? I just feel… numb. Relieved and numb. But I don’t feel free. What if I get caught? What if I go to prison for this? I couldn’t live another day with him, and there was no other way out. He closed off all my other options.

A jury wouldn’t care about that.

What is wrong with me? I still can’t believe I was able to just cut up a body like that… the body of a man I once thought I loved. I think it was the adrenaline. The poison worked fast, and then there was no backing out. I just had to get rid of the body. I couldn’t think about it. I just did it.

And now I can’t stop staring at the grout—the last evidence of the man who sold me all the lies of a perfect life. He’d come in and rescued me out of poverty. He’d given me everything—or at least that’s how it looked to everyone else.

Professional dance pays shit, especially when you aren’t a principal. You have to work your way up through the hierarchy, and a lot of dancers never get out of the corps de ballet. And in truth, the dance world is SO competitive that being in the corps of a decent company is still the dream and much more than many can ever hope for. So I don’t complain. I’m lucky.

I sometimes get a small solo, and I often have a pas de deux partner in some of the group scenes who lets me pretend for a moment out on that stage that I have some greater role, some greater career and that those screaming cheers from the audience at the end of everything are for me and me alone. I just want someone to really see me.

But I’m background. Nobody notices me. They don’t know my name. I’m there to make the principals look more epic because of all the background dancers swirling around them in perfect time.

I’m lucky I get to do what I love, even if I’ll never be known for it or ever make any real money at it. In a way, Conall was my patron. He funded my ability to keep dancing without worrying how I would also keep eating.

I’m supposed to be in the studio for rehearsal at eight in the morning. We’re opening with Swan Lake in the repertoire this season. I’ll probably be dancing the same part in the corps that I always dance. I know this part. I’ve known it for ages, but we still have to rehearse. I have to get my shit together, get a few hours’ sleep, and dance like I didn’t just kill a man.

Thanks for reading and supporting my work!