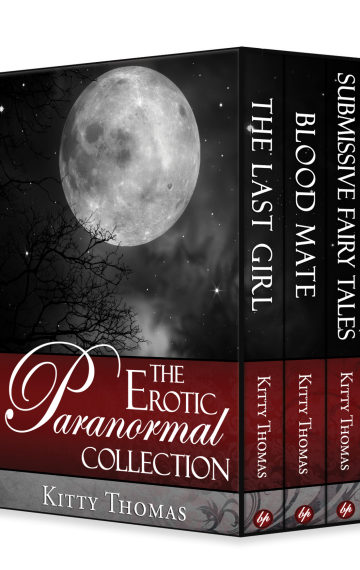 The Paranormal Collection by Kitty Thomas is 3 full-length books in one bundle: The Last Girl, Blood Mate, and Submissive Fairy Tales.

Publisher’s Note: These books are stand alone titles and not part of a series. (Although The Last Girl and Blood Mate involve vampires, they are not a part of the same world/mythology.)

Six years ago strangers broke into Juliette’s house; she was home alone. She kept her eyes closed, praying that if she didn’t see anything, she wouldn’t be killed. No one harmed her. In fact, one of the thieves protected her. Now Juliette’s dreams are haunted by him.

Christian has waited to take her, resisting the urge each night. It always ends badly with human pets. They’re too fragile. The longer he can wait, the better, because the moment he takes her, the clock on her life starts ticking down.

Then she’ll be gone forever.

Nicole has been happily married to big shot attorney, Dominic Rose for ten years, but soon after their anniversary he grows cold—as if she doesn’t exist. Meanwhile, another man has been pursuing her far too intently for comfort.

August Corinth is a six-hundred-year-old vampire, cursed to kill and suffer the pain of his victims each night until he can find the one woman who can resist his thrall, his blood mate. Once he’s found her, there are no lines he won’t cross to claim the promised salvation even if it means taking away everything and everyone she loves.

The Auction: Belle Walker lives in a strict society where women are treated as property, sold to the highest bidder soon after their eighteenth birthday. The monsters outside the city have promised to leave them in peace, but one of them is intent on having Belle as his own.

Awakening: Nerina has lived all her life as a mermaid, fascinated by humans and land but also repulsed by sex and unable to understand love. Her curiosity gets her captured by a human male intent on awakening her lust and turning her human.

The King’s Pleasure: In the kingdom of Himeros, Abigail is despised for her gypsy heritage. Pushed to the fringes of society, she’s forced to break the law in order to help feed her family. When a castle guard catches her stealing bread, he intends to cut off her hand for the offense, but the King has other plans.