Register here for exclusive giveaways and new release information. Your email will never be shared. 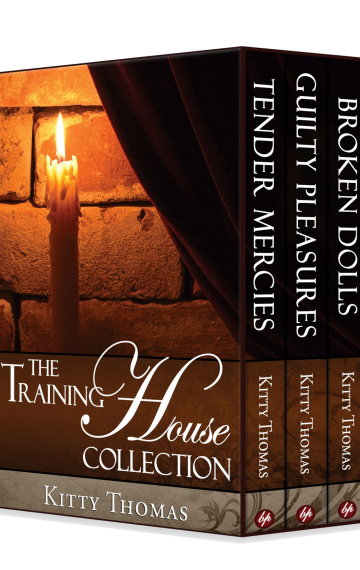 The Training House Collection by Kitty Thomas is 3 full-length books in one bundle: Tender Mercies, Guilty Pleasures, and Broken Dolls.

Publisher’s Note: These books are stand alone titles and not part of a series. (Although Guilty Pleasures and Broken Dolls occur in the same world, one is not a direct sequel of the other. Tender Mercies occurs in a totally different world, but is thematically similar to Broken Dolls.)

“Grace. That word that finally meant something again. Mercy. Favor. Good will.”

Fed up with play kink, Grace Warner moves to an island that embraces voluntary enslavement to be with a man she met online. Within hours of her arrival, everything is ripped from her, and she quickly learns play is preferable to the reality.

Asher Collins has spent the past year mourning and blaming himself for the death of his slave, Darcy. When Grace catches his eye at a showing, obviously abused, he becomes obsessed with buying her and finding a way to atone for his own past sins.