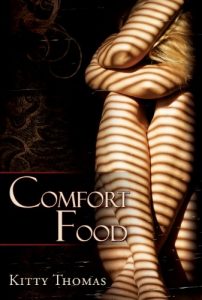 I published Comfort Food in March 2010. When I released it there was no genre. No such thing as “dark romance.” No market. No audience. I didn’t write it to piss people off or be controversial or upset anyone. It was just a book of my heart I had to write. At the same time I surely didn’t write it because I thought it was going to have some big impact on people. I thought most people would hate it, but I just couldn’t leave this story inside me.

At the time I was writing paranormal romance under a different name, and I knew definitely a book like this wasn’t going to fly with a PNR audience. (much like my mythology based Valkyrie doesn’t fly with a dark audience. They’re just two very different reader groups. There is definitely some overlap but not a lot.) 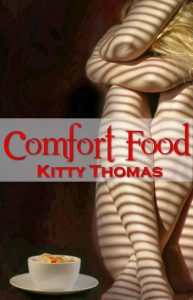 So I published it secretly, so secretly that I made an AWFUL handmade cover. (And I’m a total cover snob, so it’s saying something that I was willing to let my words go into the world with a bad cover!) I didn’t even want my cover artist to know I’d written this book. What on earth would people think of me? I was in deep undercover hiding.

Then I edited it to this: 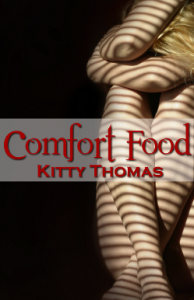 I mean it’s a TINY bit better. But thankfully I finally told my cover artist about it and she helped me!

But anyway… once I put the book out there… I did want people to read it. Why else publish it? So I started reaching out to book bloggers. Back then romance book blogging was a big thing. You could get a ton of sales and sometimes the comments section had hundreds of comments.

So I sent Comfort Food to some of these people (yes, even with the AWFUL cover I started with.) And they were gracious enough to give it a chance. And then something insane happened.

This became “THE” guilty secret book in many of the dark corners of the romance-reading internet. People were whispering about it, spreading it quietly among themselves. And that’s saying something since people were so ashamed to be “caught” having read it. They didn’t know who they could trust to tell that they read this book and that they loved it. They didn’t know who they could tell that might also love it and not judge them.

“Holy shit I’m so scared to read this.”

“I think this might be too much for me.”

“I was prepared to hate the author, but she surprised me!”

These were some of the things I “overheard” on blog comments and book groups. But I just went back to writing. It didn’t occur to me at the time that there was going to be a new romance subgenre springing out of this messed-up book.

Of course… there were also the people who wanted to buy a hardcover just to burn, the people who thought it was disgusting, evil, terrible, and that I should be ashamed for putting those words on paper.

I only occasionally witnessed these various opinions about the book, mostly I was keeping my head down and writing.

I kept writing more dark books, while also writing PNR on the other name. I had thought my PNR would be the one that had the chance to be a “commercial success”, and that the Kitty stuff was just these books that wouldn’t really go anywhere and that most of the world would never understand anyway. They’d misunderstand it and think I was spreading a retrograde message.

But readers responded more to my darker work, and so eventually I killed off the pen name to focus entirely on this brand.

And it just kept growing. And growing. And suddenly dark romance was a genre every romance reader knew about. I started to feel a little resentful. Like… “I started this! How the hell do so many dark romance fans not even know where this all started? There’s a clear paper trail online!”

I got so tired of people reading Comfort Food, and saying “It was great but it was too much like X book” when “X book” came well after Comfort Food and was inspired directly by it.

But I can’t be mad about it. I hid. I CHOSE to hide. I didn’t market. I self-sabotaged in a thousand ways out of both fear of failure and fear of success. I didn’t put myself out there. Things were mostly word of mouth and Bookbubs.

And the reason I hid? Because I knew… if dark romance got big enough… if it became something the normal public knew about, and not just a subculture on the internet, if they knew where it came from… If they knew the book that started the trend… well… that’s Comfort Food, and that makes me the witch to burn.

I know some of my books are inherently controversial. And I have always known that if I were truly willing to be seen and truly willing to take the credit for what I created, that it would only be a matter of time before the first match got lit.

I’ve never said I was “the best”. I am in awe of some of the talent that has come into this still very new genre. I only say… I was the first. I’m the OG. Comfort Food is the original dark romance. It’s the book that lit the fuse and inspired this whole thing. This whole genre.

And I don’t care what anyone thinks about that, because so many have been inspired by Comfort Food or stood on the shoulders of this book. I don’t begrudge them their success, and I’ve loved so many of their books. But I still deserve to be seen for what I created.

Literally the DAY I decided and officially stated “out loud” that I was willing to face controversy if necessary, that I would stand in my own truth and that I was ready to be seen… I was contacted by a journalist from a pretty well-known media outlet, doing a story on dark romance.

That story hasn’t yet run. It could be any day. Or maybe she killed the story. Maybe I won’t be mentioned at all. But maybe I will. I don’t know how many authors will be mentioned. I don’t know if it’s a hit piece. I just don’t know. And I don’t care because the SECOND I was willing to be seen, this person showed up.

And even if it’s a hit piece, I’m still willing. Even though I know in the broader world where dark romance isn’t loved or celebrated or even known about yet, I would be hated as much as loved. And it just is what it is.

But I would hope people would read it first before judging it or me. Because whether I’m mentioned in this article or not, whether I’m featured or not, and whether it’s fair and balanced or a hit piece, the whole world won’t love dark romance.

And there may be no controversy at all. This time. But eventually there will be because I’ve decided I’m willing to be seen and willing to truly market and put myself out there. I can’t market and want to sell books, while also trying to keep it small enough to make me feel safe. Some books aren’t safe. But they can change the world. Maybe Comfort Food is one of those books. Maybe it isn’t. But either way, I’m so proud of this book, and so grateful that people have both loved and hated it, that it made them feel something, that it made them think, and in some cases inspired them to write their own books.

January 8th, 2023: ETA: The article I was interviewed for never ran.