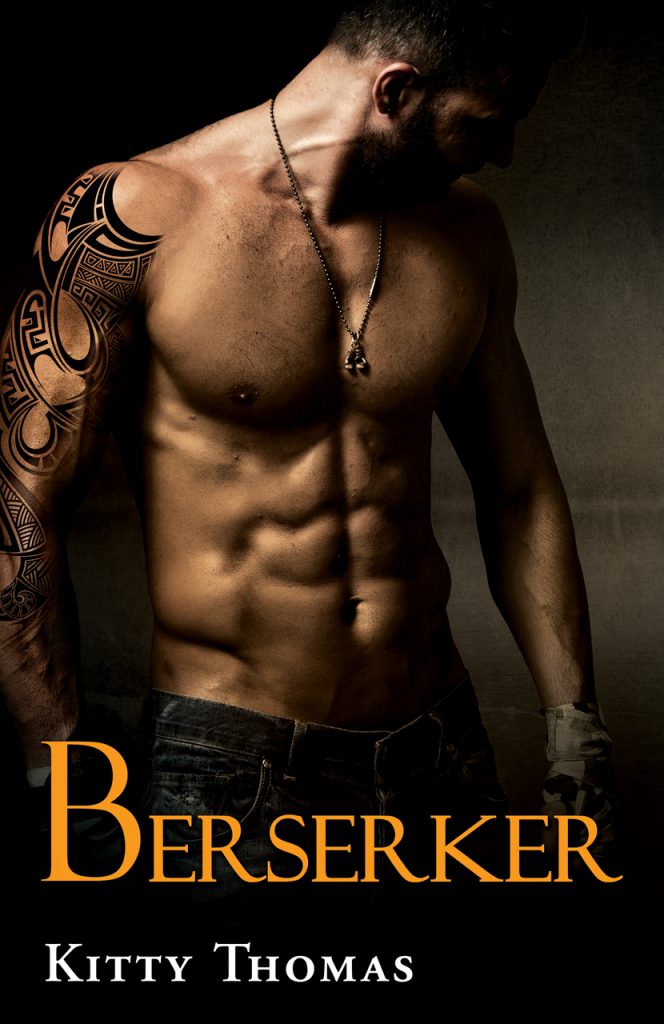 I have a special power: the ability to calm a berserker, but I’ve been warned never to use it. My mother said: “If you see a berserker in a rage… not your monkeys, not your circus. Get the hell away. They’re too dangerous, and you’ll lose your freedom.”

But the thing is… we’re flying 30,000 feet in the air in a speeding aluminum cage, and there’s a berserker raging out in the aisle beside me. Security won’t be able to hold him. They won’t be strong enough. They have no idea what they’re dealing with. And if he gets a taste of blood, he’s going to rampage through the entire plane leaving a path of death and destruction, including me.

I’ve never used my power before. I’m afraid it won’t work and he’ll turn on me, but I know all too well what these beasts are capable of. There’s nowhere to go, and he’s just getting started. I have one option: Calm him, and hope I can escape when the plane lands.

I’m working right now on Berserker. It’s an ebook-only release, a novella which will introduce you to my “Berserker World”. These will all be total interlocking standalones. What I mean by that is there literally is NO reading order and it’s an open ended series that I don’t know how far it will go or how many books there will be. So to put it bluntly there is no point in “waiting for it all to be out” because that may NEVER happen. Literally. I have NO idea how many books will be in this world. Nor do I know how far apart they will be spaced. It could be years. Each book is a complete thing unto itself. Truly and fully. So each book is a standalone in the same world. Sort of like if you read 10 contemporary romcom books by 10 different authors these books would not be part of a “series” but they would exist in the “same world” in the sense of “romcom contemporaries.” The Beresrker books will all exist in the “same world” that I’ve built for them. (i.e. the same mythology/same rules, but these characters aren’t all hanging out at the Friends’ coffee shop together.)

I just want to be very clear here. Because I think people hear “series” or “world” and they think there will be X number of books and this big story arc that goes over all the books. With my Pleasure House world… because they are interlocking standalones they can technically be read in any order but because of the overarching timeline and story arcs you also might get more out of them if you read them in order. But even so, Pleasure House was an open-ended world. Like each book I wrote could be the last book ever in that world, and nobody is left without loose endings tied. (And seriously I thought every book in that series WAS the last book. My muse kind of tricked me into a series.)

i.e. I do NOT write cliffhangers. It’s not how I roll. When you buy a book from me, you are getting a complete story. Some of those stories are longer and some are shorter but each book is a complete story. In the sense of the Pleasure House, if you read all the books you’re also getting a larger story in addition to the individual stories. That is “sort of” the case with the Berserker world but also sort of not because it’s even more standalone than Pleasure House was.

Okay, hopefully that’s all clear and nobody is confused.

So that said, what “is” the Berserker World? It’s a world that takes things from Norse mythology and puts my own spin on it. It’s a little bit “PNR-ish”. If you don’t know, PNR is Paranormal Romance. To be clear, I am not “changing genres”. I have always written PNR. First I wrote it on a different pen name and then I’ve written some dark and “dark-ish” PNR on this name. Those titles are: Awakening, The Auction (kind of more sci-fi than PNR but truthfully it doesn’t “feel” sci-fi in any way so would probably more accurately be PNR-ish), Persephone (mythology, so kind of like this in that it is “PNR-ish”), Dark Night of the Soul (vampires), The Last Girl (vampires), Blood Mate (vampires.), Three Words (werewolves).

Anyway it’s been a long time since I’ve really scratched my “PNR-ish to PNR” itch. I usually do dark contemporaries because there is a bigger audience for them and not everybody who reads my dark contemporaries is on board for PNR-ish to PNR books. I know I can’t force people, but if you truly love my other books I wish you would give this flavor of my work a try. I don’t want you to miss out on something you may truly love just because it ticked some box out of your comfort zone.

Also, if the objection is “but vampires, berserkers, werewolves, etc” are unrealistic… I don’t want to break any bad news to anybody but the odds are you will run into a vampire before you will be kidnapped by a wealthy man who provides for you, showers you in luxury, takes you to kinky parties, cooks for you, doesn’t make you clean anything, and gives you a lot of orgasms. (which spoiler alert is basically all of my books.)

Anyway what IS a berserker? (If you’re still with me) Berserkers are “kind of” like werewolves but not really. In fact I’m pretty sure that our modern werewolf mythology originally came from Berserkers. In real life Berserkers were viking age men who had pledged their allegiance to the god Odin. They were basically who people were talking about when they prayed: “Lord save me from the wrath of the North Men,” and often what most are really thinking about when they think of “Vikings”.

These men basically were fearless. Pain didn’t seem to touch them. They fought in this pure rage and tended to destroy their enemies as a result. There is some evidence these men may have been drinking a hallucinogenic tea or taking other substances in order to get into this fighting mental state. But the idea and belief among them was that they were basically shape-shifting and taking on the animal nature of either a bear or a wolf (two animals strongly associated with Odin). In fact, Berserk means “Bear Shirt”.

In fiction, Berserkers are often actual literal shapeshifters… who have a sort of “beast” with them that is a part of their make-up and have rages. And of course when someone says: “He went Berserk”, they’re referencing this lore.

So there you go. My Berserker world is not set in the viking age. Even the magic world which deals with the gods, isn’t in “the viking age”. The magic world is a kind of timeless place that doesn’t “have an age” and moves in a different way from our time. And the Berserker stories that happen in our world happen in the modern age. This includes the title novella that introduces the world, which occurs in the modern age.

So anyway… that’s where we are, I hope to see you on this journey… (And of course I will STILL be doing dark contemporaries. Again, my brand isn’t “changing”. I’ve always done this kind of work, I’ve just been doing a lot of dark contemporaries in a row so if you’re newer to my work you might not be aware of the scope of it. Also if you read and enjoyed Persephone, you will likely enjoy my Berserker world.)