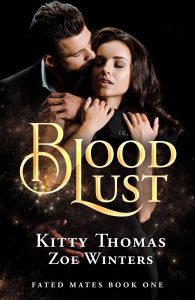 
The blood is everything…

Note: This title was originally published by Zoe Winters (me), as Blood Lust, Preternaturals Book 1. All story content remains the same. This is the only title in the series which is 3 novellas, the other 5 books are novels. All titles are complete and will be released on a rapid-release schedule (a month or less between releases, likely 2 weeks between releases.)