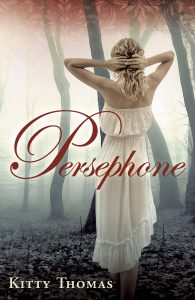 My newest release, Persephone is now available for purchase

“A dark, lush retelling of the Persephone myth as only Kitty Thomas could tell it.” — Anna Zaires, New York Times bestselling author of Twist Me

The book goes live, Monday June 26th. Until then, here’s a sneak peek from the book:

Despite the rain, the traffic moved at an easy pace like the red sea parting for them, delivering Persephone up to whatever dark fate awaited her.

Thunder cracked in the distance. The windshield wipers clicked gently back and forth. Finally, Hades broke his silence. “I wish I could comfort you and tell you I’m not going to hurt you, that you’ll be safe with me. But I don’t want to make promises I can’t keep.”

Another strangled sob escaped her control. Her hands had started shaking on her lap. But otherwise, she was silent. She had to think. There would be a moment. She had to wait for that moment so she could get away.

Then, as if Hades hadn’t as much as admitted he planned to hurt her, he said, “That hair. It’s like sunshine. So pale and blonde and glimmering. And your skin… it’s so fair with that beautiful flush of color in your cheeks, and crystal blue eyes, pure like a lake.” How long was he going to wax poetic like this? He left one hand on the steering wheel while his other encircled her wrist. “And these tiny fragile bones. Like birds. You’re everything I imagined the goddess of spring would be, like a ripe, young bud the moment before full bloom. It’s hard to believe you’re indestructible.”

Despite his coldness, Persephone’s skin felt burned under his touch.

She took a long, deep breath. “Please, you have to believe me. I’m not who you think I am. Whatever you believe about yourself, you can’t bring me into it. I’m not indestructible. I’m human. I’m fragile. I will break. I will die.”

Hades released her wrist and shook his head, a look of disgust on his face. “Your fucking father. You may very well break under my hands. But you won’t die.”

“Where are you taking me?”

“To the underworld. Where else?”

Okay, where was he really taking her? Some dank basement somewhere? A mysterious concrete compound? A cabin in the woods? Where did a guy like this like to hole up? It was a really nice car. And a really nice, well-tailored suit. This guy, crazy or not, had some money. And that scared her. It was bad enough to be kidnapped by a crazy man. It was far worse to be taken by one with resources.

He stopped in front of the Empire State Building. There was an empty space right there in front of the building for him to park. What? Persephone shook herself again. Why was he stopping here, and why on earth was there just some place for his car, as if by magic? No. She was not going to be sucked into his delusion.

“This is our stop, Sunshine. We go on foot from here to the portal.”

“But what about your car?”

Hades got out and came around to her side, helping her out of the car that wasn’t his car. No people again outside. The rain was still coming down hard. Maybe they were all inside, sheltering in place.

He gripped her wrist again and led her into the building. To her absolute and utter delight, there were people inside. Crowds and crowds. And security. She was going to get away from this guy. It was all going to be okay.

“Help me! This man kidnapped me. He’s crazy!”

But no one moved to help her. No one even turned when she screamed.

“I thought you might try that. You can scream all you want. They can’t hear you. They can’t see you,” Hades said.

He wasn’t even ruffled.

“H-how? How is this happening?” Just a few more minutes. I’ll wake up.

“I told you I’m a god. My will is always obeyed. Something you will learn very soon.”

Despite the ineffectiveness, Persephone continued to scream for help. Still no one noticed her. No one noticed that a handsome, swarthy lunatic was dragging her through the building while she fought and struggled and screamed.

“I’d hate for you to wear yourself out this early,” Hades said. “You’re going to need all your energy where we’re going.” He dragged her down a hallway to a service elevator.

An employee followed in behind them and pushed the button to the very top. The 102nd floor.

“Oh yes there is. It’s a secret floor for celebrities and gods.”

Persephone ignored that craziness and turned to the employee. “Hey! Help me! Can’t you see me? You have to help me get away from this man.” She was screaming at the top of her voice, but still the employee seemed as though he were deaf or ignoring her as he watched the buttons light up on the way to the top.

She hauled back and punched the guy in the shoulder. He jumped, rubbed his shoulder and looked around, spooked.

Hades grabbed her around the waist and pulled her back into the corner. “Now, now. That’s not nice. I only shielded for sound and vision.”

He was too uncomfortably close. Persephone felt enveloped by him. And for the first time, she felt he was something other than crazy. He was something dark and powerful and determined. She felt a hard block of muscle pressed against her back as he held her close to his chest.

The employee’s eyes darted around the elevator, unable to see that a big, terrifying man was holding someone captive mere feet from him. He turned back to the panel and pushed a button for a lower floor. The elevator stopped a moment later, and the guy couldn’t scramble off fast enough.

When the doors closed again, and the elevator resumed its ascent, Hades released his hold on Persephone. She backed away to the farthest corner from him and squeezed her eyes shut, trying to block everything out. Could this man actually have some legitimate magic powers? She felt crazy even thinking it. No. It’s a dream. When she woke up, she’d spend the whole day laughing about this. Lynette would love this story.

And yet… until she woke, all of this felt a little too real.

The elevator stopped at the observation deck. Hades dragged her out and took her to the right and pushed her through another door so fast she didn’t have time to scream at this set of tourists for help. Now they were in the belly of the building—the secret parts no one ever saw. She didn’t see another balcony. Instead he pulled her through a labyrinth of pipes and electricity boxes.

“Climb,” he ordered pointing to a terrifyingly tight steel thing that was halfway between a stairway and a ladder.

She shook her head frantically. “I-I can’t. Please, I can’t.” It was just too high. When he’d first dragged her onto the elevator, she’d thought they were going to the top observation deck, which though frightening, was enclosed by a safety fence. What if there was no fence where he was taking her?

As if there were any reality in which that could be a comfort. She did all she could do under the circumstances. She climbed.

At the top, her worst fears were confirmed. It was a cramped balcony with a railing only a couple feet tall around it. She could easily stumble over it to her death. Or be pushed.

If possible, the sky had grown even darker, nearly black as if it had become night already. The only light came every few moments as lighting streaked by, thunder chasing at its heels.

“Jump?” She couldn’t back away from him. There was nowhere to back to, except over that tiny ledge.

Persephone had already returned to denial about the things she’d seen. The silent street. The crowds who couldn’t see or hear her. She couldn’t have seen what she thought. It just wasn’t possible. Now she was back to: crazy man wants to jump off the Empire State Building—and drag her along for the ride.

When she spoke again, her voice shook so much she couldn’t believe she could get the words out. “P-please, you have to listen to me. We can get you help. I know this feels real to you, but… we will die if we jump. And I know you don’t want that.”

He laughed. “I can’t believe you still think I’m insane. The glamor around us wasn’t a big enough clue for you? This mortal Kool Aid you’ve drunk must be pretty powerful stuff. But not powerful enough.”

He grabbed her hand and brought her to the ledge. Her heart pounded in her chest and head and throat as she stood with him looking down from dizzying heights to the street far below them.

“Y-yes,” she gasped. She tried to pull out of his grip to get away from the edge. No amount of self talk that she’d wake up seemed to be penetrating the fear now.

“I hear exposure is the best cure.” And then he jumped, pulling her with him over the side of one of the tallest buildings in the city.