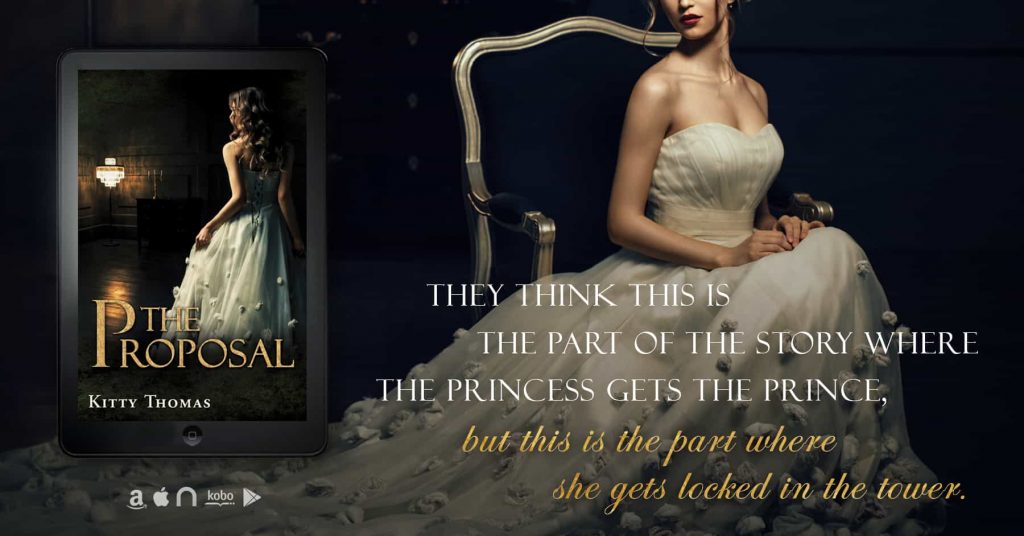 It’s hard to pick a teaser scene to share because really this is a book you need to experience the way it’s laid out. So there will be only one teaser scene for this book:

Here’s Chapter One from: The Proposal

I stand at the back of the enormous church. The stained glass windows mute the over bright sun outside on this unassuming summer Saturday at half past four. The string quartet begins to play Pachelbel’s Canon in D. Two hundred and fifty guests stand. I take a deep breath and walk down the aisle clutching the bouquet of pale pink roses which hide my shaking hands. I’m wearing a stunning white Valentino gown which I’m convinced has seven thousand buttons down the back. It’s a true white, but it’s a soft, elegant white.

You don’t realize the variety of white until you shop for your wedding gown. The color palette of white goes all the way from the harsh tacky bright white of office supply copy paper to off-white, into beige and blush barely-there pinks and lavender. Occasionally there is the most subtle mint green which you are sure must be a trick of the light.

And even though they aren’t all really the same color, lined up on the racks they seem like they all belong together. Like family. I’d considered going a little less traditional with a pale lavender or pink gown, or even that daring pale fairy green, but in the end I went with tradition—anything else feels like half measures with a man who doesn’t know the meaning of that word.

I chose to walk down the aisle by myself. I’ve never liked the idea of giving the bride away or what it represents. Besides, I don’t want to bring my father into this; it feels wrong. He’s here, on my side with the rest of my family and friends who admittedly take up a much smaller portion of the guest count than the groom’s side and business associates. His business associates are seated on my side, so everything looks more even and normal for the pictures.

I feel as though I’m being kidnapped in the middle of a crowded room, but I can’t scream. It’s like a dream where everyone acts as though everything is fine even though an evil killer clown is sawing my hand off. But still, everyone smiles politely and makes small talk—or in this case, everyone stands and murmurs complimentary things they don’t think I can hear as I drift down the aisle like a fairy tale princess.

When I reach the altar, he takes my hand in his, helping me up the two small steps to stand in front of him. The collective sitting of two hundred and fifty people is the last thing I consciously hear as his intense, searing gaze holds mine hostage. His thumb strokes over the back of my hand, and I don’t even know anymore if the gesture is meant to comfort or control me.

We stand there, staring at each other. Words fall over me like gentle rain. Vows are spoken. Rings are exchanged. The announcement that we are now husband and wife moves through the air like a cool breeze.

His hand snakes behind my neck pulling me possessively toward him as he claims my mouth as his property. Later he will claim everything else.

I’ve never had sex with this man. I’m not an innocent. I’m not a virgin, but right now I feel like one—off balance and unsure of what’s in store for me behind the closed doors of our suite in only a few short hours. I want to run as far and as fast as I can, but I know he would catch me. Right now the reception is the only thing that buffers me from his dark intentions.

We take what feels like a thousand wedding photos, each one more intimate and romantic than the last. His hands and mouth suddenly feel foreign on me as though he’s a stranger and not a man I’ve been seeing for the past year. The reception is being held at a swank nearby 5-star hotel called The Fremont, where we’ll spend the night before taking his jet to our honeymoon in Costa Rica. Our jet. Is it our jet now? Or am I merely an indefinite extra on his stage? I’m not really sure anymore.

We don’t speak during the limo ride to the reception. I don’t know what to say to him. Suddenly, for the first time ever, I have no words. All I can think about is what will happen later when there are no longer hordes of unassuming guests to protect me from his attentions. I feel more and more uncertain about this devil’s bargain I’ve made—like I ever had a choice.

I glance up to find his triumphant gaze locked on mine. It scares me as much as it thrills me, and then his thumb is stroking the back of my hand again. I find the courage to speak, but the words fly out of my mind as soon as they appear as the limo comes to a stop in front of the hotel.

The door is opened for us and my husband guides me out, helping me so that my dress doesn’t get dirty. Husband. That word feels so strange to me. So wrong and somehow scandalous. This can’t be real.

His grip on my hand tightens as he leads me up the stairs and through the hotel lobby back to where our reception is starting. The guests are already seated and being served their dinner. We’re led to our own private table at the front of everything. Some people come by and talk to him. He’s so polite to everyone, so normal, so different from the man I’ve come to know.

As we eat, silverware clinks against glasses, and each time we kiss as expected. Before the first dance, he rises from his chair, takes the microphone that is handed to him, and addresses our crowd of guests. And he is so charming. So smooth. The perfect beautiful lie.

“Livia and I would like to thank you all so much for coming to share this special day with us and supporting us as we start our life together. Don’t get too creeped out, but I filmed the proposal. If she’d said no, I would have burned the evidence.”

“But it occurred to me that probably many women wish they had a video of the proposal. And so now she does. With Livia’s permission I’d like to share that video with you now.”

Our guests are very excited about this prospect. No one knew they’d be seeing this. A large projector is rolled out along with a screen and a few minutes later a video begins to play.

He and I are on his boat in the middle of the ocean. I’m lying in the sun in a red bikini and oversized dark sunglasses. He approaches with a wrapped gift. It’s large—about the size of a Labrador puppy.

“Livia, I have something for you.”

My eyes light up on the screen. “A present? Is it a pony?”

Our guests laugh at my antics, their anticipation growing, knowing somehow inside that giant box is a ring.

I dutifully open it, only to find another gift wrapped box, then another, then another as I go through about five boxes, each time the gift getting smaller and smaller.

He chuckles again. “No. There’s something in there.”

I open the final box to find a blue box. Yes, that blue box. A box from Tiffany in just the right size.
The me on the video screen looks up at him and says playfully, “Is it a clown pin?”

I open it and start to cry when I see the ring.

He gets down on one knee and says, “Livia Fairchild, will you be my person?”

I’m blubbering and crying and say, “Yes, I will be your person.” We kiss. He puts the ring on me. It’s all so perfect.

Our guests say a collective, “Awwww” as the screen goes black. Then they’re back to clinking their silverware against their glasses, and he leans over and kisses me again.

Before he pulls away, his mouth brushes my ear. “Time’s up. You’re mine tonight.” His words are a growl so different from the version of himself that everyone else in this ballroom sees. It’s jarring the way he can go from this charming facade to something so dark and menacing in an eye blink—the way he can transform only feet from our guests. Yet only I can see the monster. Everyone else sees the man.

I swallow hard at this proclamation and twist the wedding band on my finger. There are three words engraved on the inside of the band. Those three words seal my fate.

The rest of the reception goes by in a blur. The first dance. The dances with the parents. The cake. The bouquet. The garter. All the well wishes that come from guests as they each take turns wishing us a long and happy marriage. We go through a tunnel of sparklers created by our guests, riding off in the limo with the just married sign on the back and the cans dragging along the road behind us, only to circle back into the parking garage so we can go up to our suite for the night.

My hand is trembling as he takes it in his, leading me back inside the hotel and up the elevator to our room. He carries me over the threshold. Inside are candles and champagne and fancy chocolate and rose petals everywhere.

Two men in tuxedos step out of the shadows, looking me up and down with an appreciative once-over.

My husband guides me over to the other two men, and then all three of them are touching me.

The words inscribed on the inside of my wedding band are their names:
Griffin. Dayne. Soren.