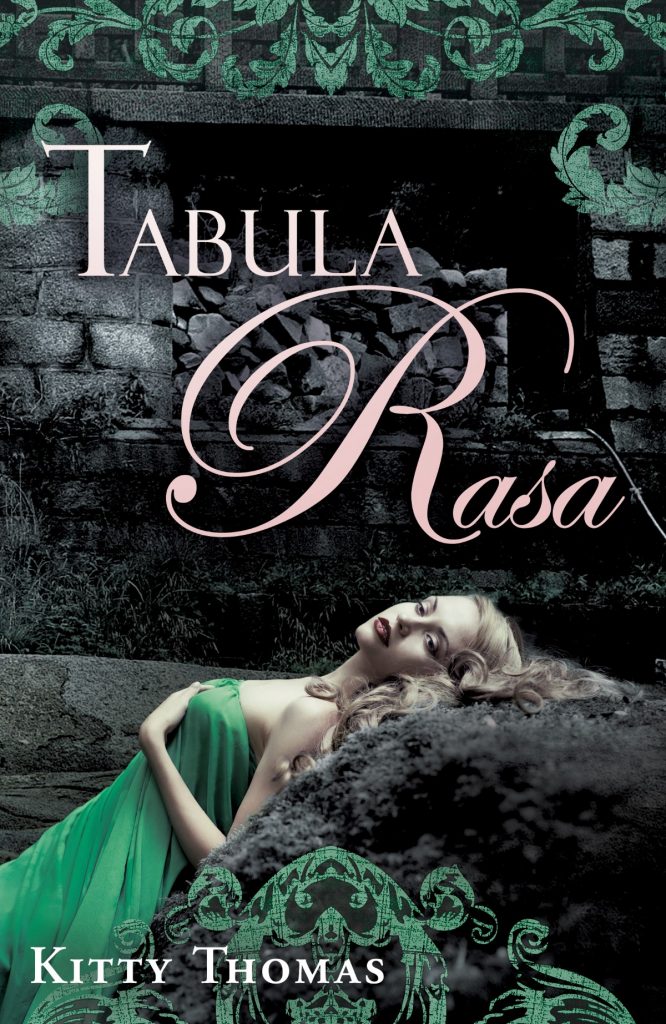 When you can’t remember your life, how can you know which man to trust?

“It’s a ride that makes you want to stay on it over and over again.” – Tabby

“I didn’t expect to love this book so much, but Kitty has done such a good job of upending the story lines that amnesia is built around… Even more than previous Kitty books, I LOVE these characters.” – The Deep Blue

“The twists and turns are amazing, and the ending… is nuanced and complex, like the book itself. I LOVED Shannon, with all his unapologetic sociopathy, and I thought he and Elodie fit together perfectly.” – Anna Z.

At some point, right before my memory clicked off, the nightmare fairy must have paid the world a visit. Everything is dead and abandoned. It’s just… gone.

I don’t remember how the world got this way, but my husband and I were lucky to find the deserted theme park when we did.

I thought we were the only survivors, but a new man has come. Shannon. He scares me. He seems weirdly possessive of me.

He’s going to take me out of the park, away from my husband and the only safety I have. I’m terrified to know what’s out there.

(This is the opening of Tabula Rasa, hope you enjoy!):

At some point, right before my memory clicked off, the nightmare fairy must have paid the world a visit. When I opened my eyes, it was twilight, or dawn. I was so disoriented it was hard to tell which. I woke in a pirate ship.

Wait. Let me start over.

It wasn’t an actual pirate ship, though that might have made more sense to my addled brain. It was part of some theme park ride that had been separated from the rest of the attraction like a wandering child lost from its mother.

The boat was big enough for about six adult tourists, each with a couple of sticky-fingered children in tow. The sides came up around me like a giant cradle. Given that the edges were rusted out, that idea didn’t create the serene feelings you might imagine it would. The ship was laid at an angle, almost on one side as if a violent storm had tossed it out of the artificial sea and into the middle of a jungle ride on the other end of the park. The trees around me were thickly overgrown with kudzu vines.

I reached to touch the top of my head, feeling for a bump or cut, but nothing, just smooth forehead and long hair.

I sifted through my mind to recall the last thing that had happened, but I came up blank. I tried to pull a familiar face out of my memory bank, but there was nothing. It was like going to the ATM only to find you’d somehow been wiped out overnight. And the bitch of it was, you couldn’t even remember what your balance was supposed to be.

I mean I knew stuff—general stuff. Like ATMs and pirate ships and amusement parks in a vague sort of way. I had basic concepts and all the tools with which to create a story of a life, just none of the actual details. It was like nothing had been written yet. I was notes on scraps of paper and pub napkins—weird little observations, images, scenery waiting to be formed into a coherent whole.

The sun sank a few inches lower in the sky, unlocking the mystery of what time of day it was. My head throbbed in echo to my racing heartbeat as if my heart had somehow decided to relocate to my skull. Why couldn’t it have been dawn? Everything was easier to cope with in the light. Even though I knew nothing else, somehow I knew that.

Why couldn’t I have stayed unconscious just a few more hours? Something—call it a sixth sense or generalized paranoia—told me I didn’t want to face what was out there at night.

I squinted into the dark bottom of the ship, looking for an unlikely flashlight. I had no supplies, no flashlight, and I had no idea where in the hell I was or how I got there.

“Hello?” I called out. I was unsure if yelling into the eerily non-fake jungle was a good thing or not but night was fast approaching, and I had a feeling some creepy crawly might eat me if I didn’t find more reasonable shelter. And dear God, please let me have been out here with someone.

I closed my eyes and hoped for some Amazon chick who knew how to navigate nature in all its many surly moods to just pop out at me with a giant machete and a friendly smile.

Pounding footsteps darted through undergrowth and brush, moving in my direction.

I shrank into the corner of the ship, unsure if I wanted whatever or whoever to find me now that I’d made my presence known.

The voice was male and urgent. Was that me? Elodie? I rolled that word around in my head a bit. Elodie. Elodie. I wasn’t sure if that sounded right or not. Did I look like an Elodie? I was struck with the sudden disturbing realization that I couldn’t remember what I looked like. Was that normal with amnesia? Did I have amnesia? Shit, for all I knew I’d come into the world fully formed in an amusement park pirate ship five minutes ago. It sure felt that way. Or maybe I was an alien sent here on some arcane fact-finding mission. At this point there wasn’t a lot I could objectively rule out.

I remained frozen in the corner, watching him. There was no internal memory jog, no mental spark. I mean, he didn’t look like a serial killer or escaped prisoner or anything, so that was something. Just a regular guy. Athletic. Tan. Good looking, but not absurdly so. Nice voice. If this guy was on my side, I might be okay.

Were there sides here?

His eyes held worry as he approached the edge of the ship. “Do you remember what happened?”

I shook my head. I was afraid to tell him I didn’t recognize my own name, didn’t know what I looked like, didn’t know him. He might not take that well. If we had some sort of involved relationship, that is. I’m not sure how I knew men could be weird about stuff like that, but somehow at that moment it felt really true.

“I was afraid to move you,” he continued, oblivious to my total lack of back story. “I told you not to climb on the ship. It wasn’t stable enough.”

“I-I’m sorry,” I said. My voice croaked, and my throat felt like sandpaper. I felt as if my mouth hadn’t formed words for thousands of years.

“Can you stand? We need to get back to the castle.”